CHARLES WILLIAM NETHERWOOD of Wisconsin, USA,  was a well-known Civil War veteran, pioneer political progressive and a prohibitionist. He was also known locally as a hiker, celebrating his 90th birthday by walking 14 miles from his home in Dane Co. to the capital city of Madison.

Born in Watervliet, New York, 14 January 1843, he was the first child of Joseph and Emma (Barraclough) Netherwood of Fixby, West Riding of Yorkshire, England, who came to America after their marriage in March 1842. Joseph, a woollen spinner, readily found employment in the expanding textile industry of New 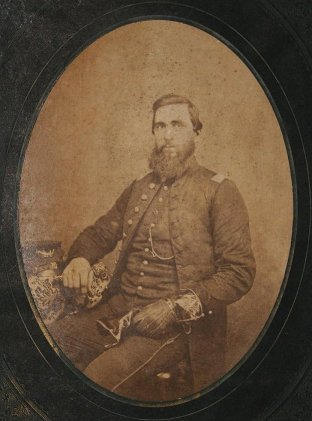 York State but eventually took his family “out West” to Wisconsin. There he bought land from which he created one of Dane County’s finest farms. “Charley” attended school at intervals from work on the farm.

In August 1862 Charley enlisted in the 23rd Wisconsin Volunteer Infantry, serving in several states including Mississippi where he took part in the Vicksburg campaign. There at Champion’s Hill on May 16, 1863, he was wounded by cannon shot which paralyzed him completely. Able to hear perfectly but unable to feel anything, he lay helpless while his companions and commander expressed their regrets and crossed his arms over his chest in anticipation of the burial squad. “I was frantic,” he later said. “I could not even move an eyelid to show them I was alive…for an hour and a half I lay there expecting to be buried alive. Then suddenly I felt one finger. The rest of my body was completely numb. I began wiggling this finger and one of my comrades who had come to take another farewell look at me saw it move. ‘Migod,’ he yelled, ‘Charley’s alive.’”

Charley remained with his Company although unable to fight. Within a few weeks he was wounded in the shoulder and jaw by gunfire and taken to a Memphis hospital. Part of his lower jaw was amputated and he was eventually sent home.

As a civilian he attended a commercial college and attempted several professions, including broom-making, but his disabled arm and poor health interfered. Then in 1869 he received a commission as postmaster for the town of Oregon and kept that position until 1893. He became president of Oregon Manufacturing Company and builder and owner of the main business block, which included a prominent structure called Netherwood’s Hall.

He also served many terms as town treasurer and president and represented the town on the county board of supervisors. A teetotaller even in his younger days, he was instrumental in getting early legislation passed curtailing the sale of liquor. He was credited with starting Wisconsin Senator Robert LaFollette on his distinguished career by urging him to run for Dane Co. district attorney. Many years later, in recognition of his early adherence to progressive principles, he was given the honor of escorting Phillip LaFollette, the senator’s son and governor-elect of Wisconsin, to his 1935 inaugural.

In 1937, at age 94, he was initiated into the Shriners, having been a Mason 73 years. That same year he was made custodian of the Grand Army of the Republic’s Memorial Hall at the state capitol. He died a year later, 4 Jul 1938, and is buried in Prairie Mound Cemetery, Oregon, Wisconsin. Charles Netherwood was a member of the Methodist church. He married three times, in 1866 to Eva Bedford who died only a year later, second to Lucy H. Gilbert nee Sayles, a widow with daughter Ada, and in 1922 to Mary Clementine Willoughby Breylinger, also a widow. He and Lucy had six children: Harry, Eva, Lucy, Pearl, Bertha and Perry.